Prof. (Mrs.) Rajita is a successful banker turned educator, a bestselling author, a global thought leader, and a transformational leadership coach. She is currently holding the following prestigious positions. 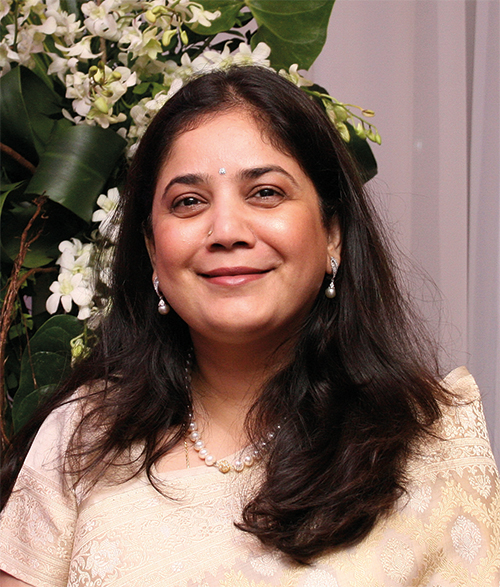 As the President of WFEB Prof. (Mrs.) Rajita leads a global Board of Directors comprising Members of European Parliament, CEOs, and international experts from business and development. In the last 6 years of her presidency she has built and worked with global coalitions of organisations from the public and private sector, government and institutions like the United Nations, The World Bank Group, The European Parliament, The Council of Europe, CERN, The International Olympic Association, FIFA, The Max Planck Institute, Institute of Chartered Accountants of England & Wales, Chambers of Commerce and various civil society organisations. In 2016 she steered WFEB to become part of a Global Partnership of 86 Institutions including Harvard, Stanford, UNDP, OECD, OGP, Accenture, GIZ, University of Birmingham among others. WFEB has taken the message of ethics, good governance and transparency in business around the world with annual conferences in the European Parliament, national/regional conferences in London, Singapore, Netherlands, Slovenia, Nepal, Poland, Russia, India, Geneva, Zurich and Mexico.

WFEB is expanding its scope of work to initiatives in the areas of Ethics in Sports and Ethics in Science and Innovation. Two World Summits on Ethics in Sports have been held in partnership with FIFA, Government of Switzerland and representatives from 21 sports in 2014 and 2016.

The World Youth Forum held under the aegis of WFEB, trains youth leaders in transformational, ethical leadership inspiring them to lead their communities for sustainable development. Universities like Nyenrode from Netherlands and Hasselt from Belgium have partnered in this effort.

Prof. (Mrs.) Rajita took over as the President of the prestigious Sri Sri University in India in April 2017. Before that she served as a member of the Board of Governors of Sri Sri University from 2009. From 2012, she and her team successfully launched the Faculty of Management Studies, A School of Yoga & Naturopathy, A School of Good Governance and Public Policy, A School of Performing Arts and a PhD program in Management & International Business, Bachelors programs in Business Administration, Commerce & Architecture and a first in Asia Masters in Osteopathy program. The University operates 11 schools currently with 850 students and will reach full capacity of 10000 students by 2021. Along with the phase wise launch of the University, she also drives sustainable community development in villages in the vicinity of the campus. She has launched vocational employment oriented programs for youth in collaboration with Larsen & Toubro, tailoring schools for women and young girls, health and hygiene camps for children. Under her supervision homes, community halls and medical care facilities have been built for 3 villages. In the last 3 years Over 550 unemployed young village boys and girls have got vocational training and are now gainfully employed. In the short time since its launch Sri Sri University has already been a recipient of many awards – Most Green campus Award from the Government of Odisha, Most Holistic Education University, Most Innovative University, Award for Synthesis of ancient and modern approaches. The University is also forging international collaborations with institutions from other countries,

Prof. Rajita’s keen understanding of the education landscape of the world, her ability to connect with academicians, students and regulators and her unique skill of bringing together diverse groups of stakeholders towards a common goal is taking the Sri Sri University team to build it as a global centre of excellence.

Prof. (Mrs.) Rajita is responsible for global design and roll out of the Transformational Leadership for Excellence program. This program is helping leaders and teams across the world access their full potential and catalyse the process of growth. She has trained and coached leaders of over 50 countries to rid themselves of their stress and live a happy, healthy life. She has worked with close to 25 governments around the world helping them accelerate and catalyse their process of social development and growth. She has worked with CEOs, Ministers, bureaucrats among others to enhance their leadership effectiveness for excellence in life. She is committed to nurturing talent by training trainers to sharpen their skills of facilitation, presentation and communication. (Annexure 2) .

Prof. (Mrs.) Rajita was the Trustee of Sri Sri Ravi Shankar Vidya Mandir from 2009-13 and again from April 2017. In this role, she is responsible for over 100 educational institutions in India, Nepal and the Gulf, reaching education to over 29000 students (including 90 schools, 1 junior college, 1 college of Ayurveda & 1 college of Computer Science). As a member of the Board of Trustees, Prof. Rajita guides the strategy, academics and administration of these institutions ensuring value based, holistic and stress free education to children and young adults.

As the Governor of Finance she oversees the administration of 425 educational institutions in India that reach free education to over 55000 children 20 states of India. These schools also offer free mid day meals, uniforms, extra curricular facilities and transportation to the children. She supports and guides the team in forging collaborations, fund raising and financial governance.

As a member of the Board of AOLHET, Prof. (Mrs.) Rajita is involved in supporting the mandate of holistic education around the world.

Before committing her life to the full-time service of society in 2010, Prof. (Mrs.) Rajita was a banker for 18 years with Citi. She held many international leadership positions in her career, last of which was Asia Pacific Head for Customer Advocacy & Training for the Retail Assets Business of Citibank. Her portfolio responsibility was annual revenues of 750 million US dollars, 16000 employees and over 800 branches across 12 countries.

Prof. Rajita lives with her husband Ajay Bagga a global Financial /Capital Markets leader and expert in Mumbai, India. She is a certified teacher of the Art of Living Happiness program and The Art of Meditation course. She loves to read, write, sing, meditate and treasures the simple joys of life.

RT @SriSriU: Congratulations to Mr. Bibekananda Kar, BBA 2018-21 for being placed with Bank of America (@BankofAmerica). We wish him the ve…

RT @ssrvm: We are extremely proud to share that Harshil Astik, our student from Grade 8, SSRVM (Mulund) was recognised by the World Book of…

Parag Agrawal @paraga of @Twitter at 37 just became the youngest CEO in the S&P 500 — pushing Zuckerberg, born earlier in 1984, to second-youngest spot. Delighted that a #Mumbaikar is leading a global company. Congratulations Parag. https://t.co/9ZCeaLeEC4